Relax in the Coronation Garden - find out amazing things about Penrith's past.
« Panel 10 of 16 »
Penrith Beacon

Penrith’s stone-built beacon is one of the most recognisable landmarks in the Penrith area. It crowns the summit of Beacon Hill, the fell rising behind the town to the northeast, and marks the spot where countless beacons were lit over the centuries to warn the population of potential raids.

The monument was built in 1719 and replaced an earlier structure on the same site. It is likely that a beacon in some form or other has been sited here since 1296.

The Beacon’s purpose was to forewarn the local population of impending attack – usually by Scots – so the inhabitants and their livestock could take refuge.

At a height of 286 m (937 ft) above sea level, the lit beacon would have been visible for a considerable distance and was one in a chain of beacons operating down the Eden Valley. In 1468, it was listed as ‘communicating’ with neighbouring beacons at Kirkoswald to the north and Orton Scar to the south.

The last serious firing of the Beacon was during the 1745 Jacobite Rebellion. It was also recorded as ‘flashing’ a warning during the Napoleonic Wars in 1804.

The land was rife with Scottish brawls
and oft ‘To arms!’ the Beacon calls;
When upward shot the lurid glare,
As if a demon’s home was there
Far above, on the highest hill
Mocking the wreck of ages, still
Stands the lonely Beacon Tower,
Safeguard from invading power.
E.B. Sutton, late 18th century 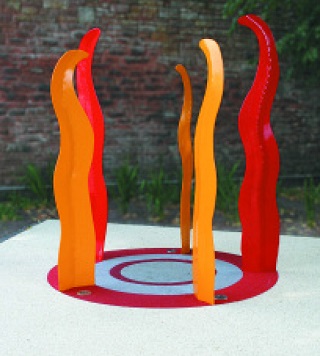 The sculpture depicts metal flames in a circular pattern evocative of a Beacon fire. The poem refers to the troublesome Border Reiver times and includes some known dates when the Beacon was lit as a warning.