Relax in the Coronation Garden - find out amazing things about Penrith's past.
« Panel 13 of 16 »
Penrith Markets

Penrith’s medieval markets were the lifeblood of the town and a vibrant focus for the community. For over eight centuries, Penrith’s markets have dictated the form of the town centre and contributed to its distinct heritage and character.

Know that we desire that a market be held in our manor of Penred on the Wednesday of every week. And that a fair be held in the same place yearly from the Eve of Pentecost to last until the Monday next after the Feast of the Holy Trinity…
Extract from Pipe Rolls of Henry III to Sheriff of Cumberland, 1222

Penrith was granted the right to hold a market by Henry III in 1222. Over the following centuries, despite Scottish raids and outbreaks of plague, Penrith became a thriving and prosperous settlement.

In the head of the ancient forest of Inglewood, is seited the famous towne and honor of Penrith; a very fine towne, and great markett and merchants for all kindes of comodities; and a grand fair on Whitsun Tuesday; and every fortnight till Lamas; for all things, horse and cattle, and wool and sheep, and ewes and lambs in especially.
Edmund Sandford, Squire of Askham, c. 1675

Over a century later James Clarke described its continuing prosperity:

Penrith has an excellent market on Tuesday, and a small one on Saturday… The markets here are disposed in a manner truly astonishing in so small a town: the wheat-market is in one part of town; rye and potatoes in another; barley in another; oats and pease in another; live-cattle, horses, and hogs have also their distinct markets.
James Clarke, Survey of the Lakes of Cumberland, Westmorland and Lancashire, 1787

The letters C and D indicate the position of the butchers’ shambles and the market cross in what is now Market Square and Devonshire Street. Here there was a Moot Hall and another building known as the Roundabout. By 1826 these had all been cleared away on the instigation of a Town Improvement Committee.

Penrith was on a major droving route from Scotland. Cattle were ‘driven’ down from Scotland and sold on Fair Hill (north of Penrith). The beast market was in Great Dockray. Here bulls were baited by dogs to ‘tenderise’ the meat before slaughter. Special mastiff dogs were bred specifically for this purpose, known as Penrith bulldogs.

Later, the various grains were sold outside inns in the Cornmarket: rye in front of the Black Bull; wheat beside the Black Lion; oats near the White Hart; and barley at the Griffin.

In 1696, William III granted the ‘Honor of Penrith’ and the rights to hold a market (and therefore to trade) to the Duke of Portland. One hundred years later, the rights were sold to the Duke of Devonshire. Traders paid a market rent to the charter owner in the form of oats, barley or wheat − the rent being precisely measured in special ‘multure’ bowls.

In 1878, Penrith Local Health Board purchased the market rights from the Duke of Devonshire and a monetary charge was substituted for the toll in goods. Control of the markets passed to Penrith Urban District Council on its creation in 1894 and to Eden District Council in 1974. 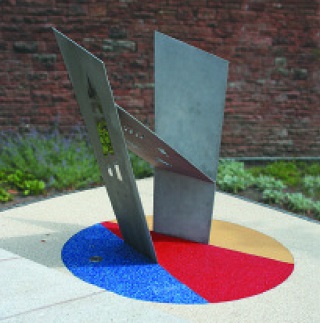 The sculpture makes reference to Penrith’s status as a market town. It is a deconstructed market stall and includes motifs based on the ‘ten trees of Inglewood Forest’, whereby newcomers to the town were allowed to fell ten oak trees to build shops and stalls. Symbols represent the six markets mentioned on James Clarke’s map of 1787. The sculpture also includes a reference to the Musgrave Monument in the heart of the town.