Relax in the Coronation Garden - find out amazing things about Penrith's past.
« Panel 4 of 16 »
The Honor of Penrith

The Honor of Penrith. Manors highlighted in red made up the ‘honor’
Juliet Whitworth

In the 11th century, Cumbria was part of Scotland until 1092 when William Rufus, son of William the Conqueror, brought the area under English rule. Not surprisingly, the Scots continued to claim this region as their own and embarked on a series of devastating raids into Cumbria in an attempt to regain control.

In 1242 a compromise was reached whereby the Scots agreed to relinquish their claim in return for having jurisdiction over an area comprising the manors of Penrith, Sowerby, Langwathby, Great Salkeld, Carlatton and Scotby, collectively known as the ‘Honor of Penrith’. In medieval England an ‘honor’ consisted of a number of manors that could be scattered over a wide area.

The Scots held the Honor of Penrith ‘of the King of England by fealty and homage on payment of one soar-hawk annually to be delivered at the castle of Carlisle’ – in other words, the Scots had the right to control the area subject to the English crown.

Around the same time that the Honor was agreed, an official seal for wax-sealing important documents was created that acknowledged the town’s strong links with Scotland. Made of brass and copper alloy, the seal displays the Scottish cross of St Andrew (who is also patron saint of the local church) and bears the inscription: ‘Sigillum commune ville de Penreth’ or the ‘Common Seal of the Town of Penrith’.

The seal was in use for many years and then unaccountably disappeared. It was found in the mid-19th century buried near the old church in Brampton, about 24 miles (38 km) away. It is possible that the brass seal was carried off by Scots during one of their raids into Cumberland and was lost or buried on their retreat homeward. The original seal is now in Penrith and Eden Museum.

The amicable agreement allowing Scotland to administer the Honor of Penrith lasted just 50 years. In 1295 Edward I seized back the manors as part of his campaign to impose English rule on Scotland.

The Seal of Penrith design remains an iconic emblem of Penrith. It was incorporated in Penrith Urban District Council’s coat of arms and can be spotted at various locations around the town centre. The seal was also adopted by Eden District Council as the brand logo for Penrith’s Wayfinder signs. 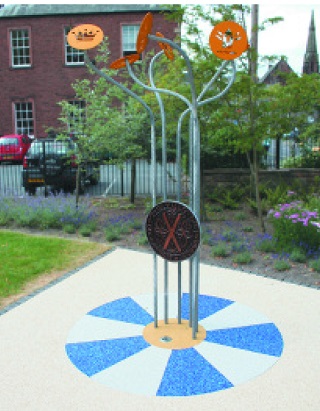 The sculpture is a new ‘tree’ for the Coronation Garden, celebrating aspects of Penrith’s history on its ‘leaves’ (representing Romans, Penred Regis, Penrith Castle and Richard III, the Beacon, Musgrave Monument and today’s young people), and bears a replica of the town seal at a lower level.