Relax in the Coronation Garden - find out amazing things about Penrith's past.
« Panel 7 of 16 »
Penrith Castle

Commanding one of the highest positions in the town, Penrith Castle has survived centuries of plunder and attack, and is a lasting reminder of Penrith’s turbulent history.

Relentless Scottish attacks during the 13th and 14th centuries saw the building of many pele towers as a means of defence. In 1397, Bishop Strickland was granted a licence to ‘crenellate’ (add battlements to) a building in Penrith. This may have been the Bishop’s Tower (at the western corner of Penrith Castle) or Hutton Hall in Friargate.

By the end of the 14th century, Penrith Castle had been considerably extended by Ralph Neville, first Earl of Westmorland and Lord of the Manor of Penrith. The castle was not only a defensive fortification, but a place of refuge where the inhabitants of Penrith and their cattle might find protection against Scottish marauders.

Ralph’s grandson was Richard Neville (1428−1471), Earl of Warwick, otherwise known as ‘Warwick the Kingmaker’. He was given the Manor of Penrith by his cousin, Edward IV, and made substantial alterations to the castle and St Andrew’s Church. Warwick supported the Yorkist claim to the throne during the Wars of the Roses and helped Edward IV accede to the throne.

Later, he changed allegiance and supported Henry VI’s Lancastrian claim to the throne. When Warwick was slain at the Battle of Barnet in 1471, Edward immediately forfeited Warwick’s estates including the Manor of Penrith and gave them to his brother, Richard, Duke of Gloucester.

Richard married Warwick’s daughter, Anne, and made further modifications to Penrith Castle, transforming it into a suitable residence befitting his new status as Sheriff of Cumberland and Lord Warden of the Western Marches. His role was to secure the county from Scottish attack and keep rival families under control – a role he undertook with great skill.

After Edward IV’s death in 1483 and the disappearance of his two sons (known as the Princes in the tower), Richard was crowned king of England and moved to London as Richard III.

The coat of arms of Richard, Duke of Gloucester

Penrith Castle remained Crown property but was never again used as a permanent residence. By the mid-16th century, surveys describe the castle as partly decayed. It was briefly in use as the headquarters for one of Cromwell’s generals during the English Civil War in 1648, but thereafter suffered further decay and dismantlement.

In the 1840s the castle was sold to the Lancaster and Carlisle Railway and its buildings were used for stabling horses. By the turn of the century Joseph Tremble and Sons had created a market garden behind the castle.

In 1912 Penrith Urban District Council acquired possession of the castle and created a park out of the grounds (opened 24 May 1923).

The castle is now in the care of English Heritage. 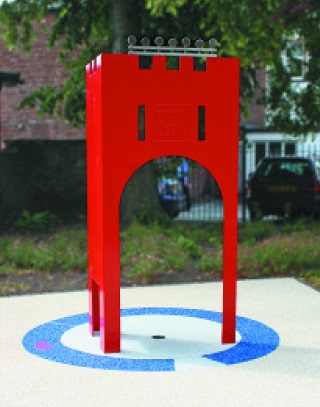 This sculpture is based on Penrith Castle, incorporating a gateway and the Red Tower, a crown symbolic of Richard lll, and a hidden elephant motif. The sculpture is encircled by a blue moat with a representation of an elephant’s tooth that was dug out of the moat in 1921, possibly from a Victorian circus elephant. The tooth is now in Penrith and Eden Museum.